My kiddos are 19 months apart.  Man was it hard at first, but it worked out because they are the best of friends and have a lot in common since they are close in age. Towards the end of my pregnancy with McKensie, I would take Kyle to McDonald’s on Fridays for breakfast.  He loved the pancakes and sausage (maybe I did too).  I would get an order and we would share it.  I didn’t mean for it to become a “thing” for us.  The first time I went it happened to be during the time that the retirees were there eating breakfast and drinking coffee, visiting with each other.  They fell in love with Kyle and asked me to please come back.  So I did (smile).  This tradition started when he was 16 months old and they were just amazed at how well he sat and ate his breakfast.  He used his fork and not his fingers.  He said please and thank you.  They called him a little man.  He was a smart cookie, but more than that he just liked to do what I did so he paid attention and did what I did.

A few months after my mom passed away, my aunt and my cousin took my kids out to lunch to spend some time with them and to give me a break.  McKensie was two and a half at the time.  As they were eating lunch, someone pushed back their chair from the table and it made a loud scraping noise on the floor.  McKensie exclaimed, “Oh that startled me!”  My cousin was amazed that she would use such a big word being so young.  She also was a little sponge and soaked up what was done and said around her.  In fact, my kids are not special in this regard.  I think ALL kids do this.

Unfortunately, not all kids learn good things from the adults around them.  I know many parents of kids who are LGBTQ that get nervous this time of year.  Why?  It’s time to go back to school.  There have been some good first days, but even though school has just begun…there have also been some awful days.

A family in Oklahoma is moving for the safety of their 12 year old transgender daughter.  Moving.  The school district had to shut down for two days because of what parents were saying in a Facebook group that were threatening to the 12 year old girl.   ‘Adults had referred to her as “this thing” and a “half baked maggot” threatening to “make him a female” with a “good sharp knife.” ‘  You can read the full article here.  They encouraged their kids to bully the girl so that she would leave the school.

Who do you think was watching these parents?  Listening to these parents?  Their kids.  So is it any wonder that we are finding  kids younger and younger bullying others…to the point where they take their lives?  Nine year old Jamel Myles from Colorado took his life four days after school started.  He had come out as gay to his classmates and the bullying was horrible.  Classmates told him he should kill himself…so he did.  (Instead of being outraged over the bullying, people were debating how a 9 year old could know he was gay.  I’ll address that in another post)  A mother of an eleven year old found her son crying himself to sleep after reading that story.  The previous year he had been urinated on in the boys bathroom by several boys…some of which were his friends…some from his church.  When that happened to him, he contemplated jumping off of an interstate bridge to end his life.  He felt survivors guilt that he was still here.

Is it any wonder why the beginning of the school year would cause stress for parents and their kids?  Kids learn from their parents, but they also can get caught up in bad situations.  They go along with the bullying because they don’t want the bullying to turn towards them.  Talk to your kids about this.  Give them some tools to learn to step away from a bullying situation, or tools to stand up for the kid being bullied.

Unfortunately, bullying doesn’t just come from an individual.  Sometimes it’s from something much bigger than that.  Like the Church.

My friend’s son came out last summer.  This year when he went back to college she was rearranging his bedroom.  When she moved his dresser from beside his bed, she found this written on it. 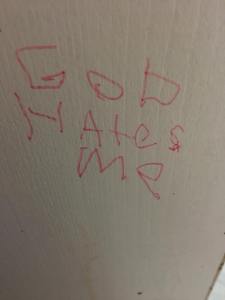 As you can see, it is written in the handwriting of someone young…not in college so it’s been there for some time.  I can’t speak for my friend…that is her story to share.  But I can say that this breaks my heart.  To think that this precious boy laid his head on his pillow next to what he had written every night for years is beyond what my heart can take.  Where did he learn this?  The Church.  And let’s be clear here.  You don’t have to say the words “God hates you” for this message to get imprinted onto a young person’s (or old for that matter) soul.  The Church can think that they are handling things with “truth and grace,” but that is not the message that is heard.  This happens when the person giving the truth and grace doesn’t really know the person or their story.

I would say that silence is just as deadly.

There are LGBTQ youth sitting in church pews hearing that they are destroying America.  They hear that wanting to be loved will destroy straight marriages and family values.  They are wondering what in the world they are doing to cause this.  They wonder why people think this about them.  I would go as far to say that there are people I know that have suffered emotional and spiritual abuse from the church.  And because it comes from people within the church, these kids see it as what God believes about them.  “God hates me.”  If you are abused by your earthly father, it is hard enough to come to terms with that and heal from it.  How much harder do you think it is when that abuse comes from God (through God’s people)?  We tell people who struggle to go to God for help…that He loves them…that He’s for them…that He never leaves or forsakes them.  He can get them through everything and anything…but then tell the LGBTQ person that the same does not apply to them.

What hope do they have?  You feel abuse by the One that is supposed to save you.

I’ve said it before…I’ll say it again.  We must do better.  Lives are at stake.

This month is National Suicide Month.  If you are LGBTQ and need help, reach out to The Trevor Project.  You can call, chat, or text.

Love matters friends.  How we love matters.  Lives depend on it…

2 thoughts on “How many tears…how many lives…”