I thought I’d post a little earlier than I usually do to talk about my wedding since today is my 25th wedding anniversary (I got married when I was 10)…well not really (smile).  When I was a little girl, I knew that I wanted to grow up and get married some day.  Now I wasn’t the type to collect pictures and ideas along the way, but I did think about it.  I’m a simple girl…most comfortable in jeans and a t-shirt and I hate getting dressed up, but I have to admit wedding dress shopping was a lot of fun.   So this post is for all the soon to be brides out there.

There is a lot of planning that goes into most weddings and mine was no different. You have the dresses, the venue, the flowers, the cake, etc, etc, etc.  Well this is how mine went…. 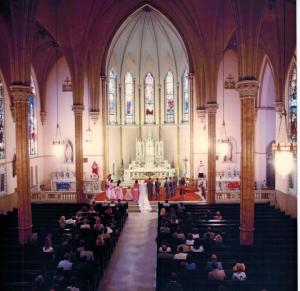 I went to get my hair trimmed a week before the wedding and the person cut 4″ off.  My hair looked sooo different, and I was really upset because it didn’t feel like me.

Two days before the wedding I got really sick, went to the doctor, and found out I had strep throat.  That same day I checked in with the dress shop because they were behind on my alterations.  They assured me that my dress would be ready the next day.  They told me that they would call when it was ready.  I waited all day, but no word from the shop.   I called them early evening only to find out that they had just closed the shop for the day. My wedding dress was in the shop and my wedding was the following morning.  They said they would send it over to the tuxedo shop next door that was open a tad bit later then they were and I had to run there to get the dress.

The next morning (the day of the wedding) I noticed that the address for the church on the wedding invitation was wrong.  It was close.  I can’t remember the exact address, but it was something like 101, but should have been 1001.  A simple thing to miss.  So, I was worried that no one was going to find the church.

When the photographer got to my house, it was obvious to see that he had broken his ankle.  The pictures took much longer than they should have and he informed me that he couldn’t go to the reception, but would send his assistant.  Let’s just say he didn’t seem as experienced as our photographer.

My limo was late, therefore I was late getting to the church.

Just as we were getting ready for the first bridesmaid to walk down the aisle, the organ made a horrific sound and stopped working.  So, all the girls AND my dad and I walked down the aisle in silence.

We had talked with the priest who married us beforehand and let him know that we wanted to take a cloth and wrap our hands (it is a tradition from another culture, but don’t remember what it is called – sort of like tying the knot).  When we got to that point in the service, he basically tossed it to us and said, “I’m not sure what I’m supposed to do with this.”

At the reception, the DJ got the names of the bridal party wrong and actually announced my best friend as the bride.

We gave a list to the DJ of songs that we wanted played during the reception one of which was a tribute to my grandmother who had passed away 3 years earlier.  I wanted to dance to one of her favorite songs with my grandfather.  The DJ waited until the reception to tell me that he didn’t have the song…right as my grandfather and I were getting ready to do the dance.  I asked if he had any Engelbert Humberdinck because that was one of my grandmother’s favorite singers.  He said he did. Unfortunately, I didn’t ask him what song he had of Engelbert’s.  My grandfather and I went to the dance floor and…

The DJ played “Please release me” which lyrics go like this:

Please release me, let me go
For I don’t love you anymore
To waste our lives would be a sin
Release me and let me love again

What a song for a tribute!

We found out shortly after our wedding that the priest who married us allegedly murdered a nun because she found out he was molesting girls (story here).  They made a Netflix documentary about it.

Now obviously this was not a perfect wedding.  But you know what…we have funny memories.  If it was perfect, we wouldn’t have the stories to share with our kids.  So brides…don’t sweat it.  In the long run, it really doesn’t matter.  And 25 years later we are still happily married.

8 thoughts on “Perfection is over-rated…”