When I was about 7 or 8 years old, I was a pee wee majorette.  This is me.  Yes the hat was just about as big as I was 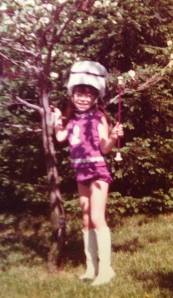 back then (smile).  Purple outfit, purple baton, and white boots.  Woo hoo!  I liked marching in the parades, but I really couldn’t wait to be one of the “big” girls. The routine that they did was way cooler than ours. They actually got to throw their batons.  My group routine was so simple that I still remember it today.  We would march through the streets repeating the movements over and over again.  One day as I arrived at the starting point of the parade, I was told that our leader was sick and couldn’t make it.  The leader was always in front of us and she let us know when it was time to do the routine.  Her most important job was to make sure we were ready to go when we passed in front of the judges.  Yes we were judged…I’m not sure why…I don’t remember seeing anyone winning anything, but there must have been some kind of reward at the end of the parade.  On this particular day, I was informed that I was going to be the leader.  Gulp!  Me the leader??  I wasn’t sure I wanted to do it.  But honestly I felt like I didn’t have a choice so I took my spot at the front of the group.  I was told where the judges stand was located and off we went.  I was so nervous.  Everything we did was an 8 count.  Put your arms up and out…1, 2, 3, 4, 5, 6, 7, 8.  Fold your arms in front of you…1, 2, 3, 4, 5, 6, 7, 8…and so on.  I saw the judges and I led my little group through the routine…and I survived!

This was something I enjoyed.  I signed up for it.  Even though it was something I did willingly, being judged on it was very nerve-wracking every time I did it.  Sweating bullets kind of pressure even it if was just the pee wee majorettes (smile).  Have you ever signed up for something that required you be judged on your performance?  It’s a bit overwhelming sometimes.

How about not signing up for the judgement?  How about being judged for who you are?  I know I’ve talked about this judgement thing before, but it keeps coming up in conversations.  So, it’s just something I’ve been thinking about again…or God’s been having me think about it.  I think sometimes people just don’t realize that they are judging others.  I’ll give you an example…Before we came out that our son is gay, my husband and I were with a group of people.  The topic of homosexuality came up and one of the guys in the group piped up and said, “those people are freaks!”  If I had hair on my back like my dog Lucy, it would have been puffed up like hers when she is in protector mode.  My first reaction inside was anger.  But God gently whispered that this statement was coming from ignorance.  And I don’t mean someone who is unschooled or illiterate, I just mean someone who doesn’t have the experience or knowledge on the subject matter.  It helped me to calm down.  When my husband and I came out to this same group, the same guy touted that he is not judgemental and would never judge our son.

So what was offensive or judging?  First the statement of “those people.”  Ask any gay person and they will tell you they want to be treated like everyone else.  They don’t want to be seen as “those” people…just people.  And the “freak”part is obvious.  Did you know that silence can also feel like judgement?  You may not mean it, but your silence at times speaks volumes.  And it may just be that you don’t know what to say.  I want to let you know it’s ok if you don’t know what to say….just say that! (smile).

We need to remind ourselves of this:

2 You may think you can condemn such people, but you are just as bad, and you have no excuse! When you say they are wicked and should be punished, you are condemning yourself, for you who judge others do these very same things. 2 And we know that God, in his justice, will punish anyone who does such things. 3 Since you judge others for doing these things, why do you think you can avoid God’s judgment when you do the same things? 4 Don’t you see how wonderfully kind, tolerant, and patient God is with you? Does this mean nothing to you? Can’t you see that his kindness is intended to turn you from your sin?

Now this verse says, “for you who judge others do these very same things.” Maybe this is a stumbling block.  A straight person does not struggle with same-sex attraction, and they never will.  And because they don’t struggle with it, it is easy to condemn others who do.  An “I would never do that.” type of attitude.  I don’t know. When I read this verse, I read that I am a sinner.  Just like everyone else.  I need to worry about myself and go to God for forgiveness and be sure to forgive others.  It’s not my place to point out to someone else what I think they are doing is wrong.  And I’m not talking about the whole accountable thing that church people like to talk about.  You don’t know what any one person is going through, and you don’t know what kind of relationship they have with God.

It amazes me sometimes that people are surprised about the struggles that some gay people go through.  People are really hurting out there.  They overhear statements like what I mention above.  They didn’t choose to be gay (I don’t think I can ever say that enough).  Being judged for who you are is just unfair.

Just my ramblings this week…a topic I’m sure I’ll be thinking about again.