The year was 2004.  Hurricane Jeanne, the deadliest hurricane during the 2004 Atlantic hurricane season was heading right for Florida…and so was I. The trip had been planned for a couple of weeks.  I had taken the time off work, gotten my mother-in-law set up to come stay with my husband and kids so she could get them to school, and my sister made arrangements to join me so I didn’t have to make the drive alone. It was a 950 mile trip.

At the time, I had been dealing with an illness for 10 years.  I had seen many doctors, but wasn’t getting any answers.  My father was living in Florida and found a really good doctor there.  During a visit with my dad in 2000, I made arrangements to see this doctor and he was very helpful.  The trip in 2004 was to see that doctor again.  He had some ideas to help with some of my latest symptoms.  One of which was a fever.  I woke up one day with a 103 temperature for no apparent reason.  I went to the doctor and had lots of tests, but nothing showed up.  At the time of this trip, I had that fever every day for a year at various degrees.  When you have a fever, you feel pretty lousy.  And this particular fever did not respond to medication.  I was desperate.  So driving to Florida was really not a big deal for me.  Everything was in place.  At first it seemed like hurricane Jeanne was going to cooperate and miss Florida, but in the final moments before the trip, the storm changed course and headed towards Florida again.

I didn’t care.  I wanted to feel better and was willing to do whatever it took. My sister was on board as well.  Our plan was to call my dad as we entered each state (there were 5 in all), and he would check on the storm and tell us whether we should continue on our journey.  Virginia, North Carolina, South Carolina, and dad said to keep going.  When we hit state number four, Georgia, we could feel the wind picking up, but Dad said we could make it.  We made it through Georgia and as we entered Florida it was clear that things were getting rough.  As we entered the state, the first thing we were greeted with was one of the big road signs torn out of the ground, twisted up on the side of the road.  There was also a row of trees that were completely missing their tops.  Did I mention that my sister is afraid of storms??  From the passenger seat, the words, “Oh my!” were repeated over and over again…each time with more enthusiasm and fear than the last.  We called dad and he said he thought we could still make it to his house.  He was 3 hours away. 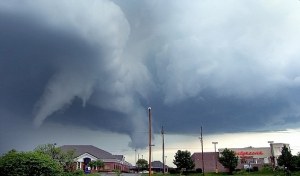 At this point, the sky was very ominous.  It looked like it was split in two…the top was black and the bottom section was white.  My sister was fidgeting in her seat looking back and forth at the sky.  The question she would ask over and over again was, “Is that a funnel cloud?!”  Over and over my answer was “Nope.”  I have to admit…I was watching that sky like a hawk.  Little tufts of black kept dipping down into the white section of the sky.  I didn’t tell her what I was thinking, but it was basically, “No that’s not a funnel cloud, but it’s the beginnings of one.” And then it happened…I looked over to my left and I watched as one of those little tufts turned into a tornado.  It was just a few feet away from us.  We were just a few exits away from my dad’s so I floored it.  When we took the exit, we saw more damage from the wind. Traffic lights were down in the road and I had to weave around the debris.  We made it safe and sound to my dads. The storm hadn’t hit land yet, but when it did I remember thinking, “What in the world did I get myself into??” The winds were incredible.  They made the glass patio doors bow almost like curtains blowing in the wind.  I’ve never seen anything like it before.  We could hear transformers blowing up all around us.  It was a long night, but we survived.

Driving through any storms in your life lately?  Are you letting your heavenly Father guide your path?  He can see the big picture.  He knows what path the storm is going to take.  He will wave you on, or block your path.  But how will you know what He wants you to do?  It takes knowing Him.  It takes having a personal relationship with Him. He knows you intimately and loves you.  He wants you to take the time to know Him.  If you do, you will hear His voice guide you through the storm.  My dad told me to keep coming because he knew what I could handle.  God knows what you can handle to…if you have Him with you in the storm.

I found this on FB this week and it reminded me of this adventure.  I think there is a lot of truth in it.  I like it

because it is a great reminder to me.  That fever I mentioned. I had it everyday for 5 years.  It left as mysteriously as it came.  It comes back occasionally, but it doesn’t last as long…thank goodness.  But honestly when it does come back…I don’t know whether it will last another 5 years or more.  I have to trust God to give me the strength I need to deal with it.  No matter what the duration.  I have weathered some storms, but I still love to dance in the rain…I do a little singing too (smile).  I hope you trust God to get you through your storms.

He wants to be there for you because He loves you…and love matters.