One of my favorite shows on television is Top Chef.  You would think I liked to cook with as much as I watch it, but in reality I really don’t.  Part of the reason I find it unpleasant is all of the dietary “restrictions” that are in my family.  For instance, my husband hates tomatoes, and any color pepper.  I guess it could be worse…when I met him all he ate was boxed macaroni and cheese, and stove top stuffing (smile).  My daughter hates anything Italian, and doesn’t care for garlic in her meals (there are many other dislikes, but the whole post would be about that).  My son is a vegetarian. He isn’t always home for dinner so that isn’t much of an issue, but when he is I am at a loss for what to feed him.  This also means no chicken or beef stock in recipes for him.  Then there is me.  I’m not supposed to have white potatoes, rice, pasta, or bread.  So, it’s a whole lot of no fun when trying to figure out what to make for dinner.  Sigh…

Despite all of that…I love the cooking shows…especially Top Chef.  They put those poor chefs through the most 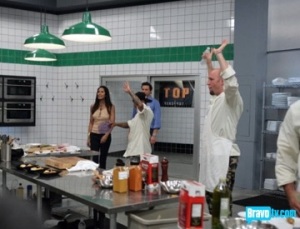 difficult challenges.  I like to see how they come up with creations with all of the wrenches that they throw at them.  Not only do they deal with some strange food sometimes, but the kitchens that they give them to work in aren’t always the best…in fact…they aren’t always kitchens!  And the amount of time they give them to come up with elaborate dishes…forget about it!  They rush around the kitchen, cooking like crazy, waiting for the dreaded words, “Hands up – utensils down.”

One of the things I find fascinating is when they deconstruct a dish.  You will hear them say, “this is chicken pot pie deconstructed” and it looks nothing like what a chicken pot pie is supposed to look like.  The chefs break down the original recipe by looking at each ingredient individually.  Sometimes they elevate the ingredients by choosing a more healthy option, or a more gourmet replacement.  When they cook the dish, they make it their own and arrange it in a completely different way.  It’s the same, but it isn’t. (smile).

Well I can say that my faith has been deconstructed.  I’ve shared before that when I first learned that my son was gay, I was afraid to read my Bible.  I didn’t want to read that I would need to abandon my son.  I didn’t want to read that I shouldn’t love him anymore.  I know that sounds crazy, but there are churches that teach this doctrine.  I never heard this teaching at my church yet I was afraid.  This intrigued me.  Why did I feel this way if it was never taught from the pulpit?  As I’ve met more people, I’ve realized that this is really common…even in churches where it wasn’t talked about.  I think it stems from the overall message from the Christian community.  It’s an unspoken belief in many cases.  Since I believed something that was never taught directly to me, I wondered how much more of my faith was “tainted.”

I read the Bible and I’ve been in tons of Bible studies.  But even given that, my faith was flat.  The scary thing is that I didn’t realize it.  I took the different teachers at their word.  I didn’t really question what they were telling me.  I’m not saying that what they taught was false, but I decided that I should dig deeper.  So that’s what I did, and it’s been amazing!  I have learned so much.  When something hits you personally like this, it has the tendency to turn your faith upside down.  And that’s ok.  I would say that it’s actually a good thing.

I took the pieces of my faith that had shattered to the ground.  Questioned them. Examined them.  Then took the parts that made sense to me, elevated the ones that were weak, and turned them into a gourmet faith that has deeper roots and bears more fruit.  At least that’s my hope.

I was so inspired by the faith of the people who attended The Reformation Project conference that I went to in November.  I sat in the back of the church the first night.  As worship began, you could feel God’s presence.  I had already met several people who stories with the church were not good stories.  As I watched faces turned upward, hands lifted, and voices raised tears flowed down my cheeks.  I couldn’t get over the expression of love that I was witnessing.  This coming from some who weren’t even allowed in churches in their home towns.  People who have been told that God hates them.  Told that they are an abomination.   They were finally free to worship God in a church with fellow believers.  Their faith was strong and it flowed out of them like a river of love for God.  It was beautiful and it has changed me forever.  Despite their trials, they had a deep faith and love for God and it was inspiring.  My prayer is that they will one day no longer feel rejection and be free to worship where they want to worship being loved for who God created them to be.

2 thoughts on “Caution…deconstruction up ahead…”