Last October Mike and I went to Cape May, NJ for our 28th wedding anniversary.  It was the first time we had ever been there and we LOVED it.  I may have loved it a little more because I would move there tomorrow if the opportunity presented itself.  It has a beautiful beach, cute shops, and amazing Victorian houses.    I could walk around and look at those houses everyday.

We did a lot of walking while we were there which is what we typically do.  We park our car and try to leave it put while we are on vacation.  It’s the best way to really take in the sights.  One of the spots we enjoyed was a 3 block outdoor shopping mall with brick laden sidewalks, cute little shops, and restaurants.  One day, when we were tired from walking, we decided to get a coffee and sit on one of the benches to rest.  We chose our spot and sat to enjoy some people watching.  Sitting right across from us was an older gentleman. He was dressed in a button down long-sleeved shirt with pants pulled much higher than they needed to be.  He was wearing a newsboy style hat and had a cane resting next to him.  Sitting by his side was a younger version of himself that we later found out was his son. He caught my eye because he kept giggling.  It was contagious.  I looked around to see what caused his amusement and that’s when I saw it.  The POOP!

Now don’t worry…it wasn’t real poop.  Right behind him was a store called “Just for Laughs,” and he had gotten his gag poop from there.  He had tossed it into the middle of the walking area and watched as people kicked it, stepped on it, or jumped out of the way to avoid it.  It was believable because many people brought their dogs with them.  Once I saw what he was up to, I couldn’t help getting pulled into the joke.  His eyes would squeeze tight and his shoulders would shake with laughter.  It got to the point that I stopped watching the people and just watched his reaction.  I laughed right along with him…like I said…it was contagious.  And when he realized that Mike and I had caught on, his joy seemed to increase and his laughter more boisterous.

This went on for some time, but he just wasn’t satisfied.  He got up from the bench, grabbed his cane, and slowly made his way back into the store.  He came out with some brand new poop that he felt was a little more convincing.  He tore it out of the package, threw it down on the ground, and a dog ran over right away to sniff it.  The man loved it. It was more realistic and he got some better reactions from it.  I’m not sure how long we sat there and watched this scenario.  It caught some attention and some other people stopped and enjoyed his joke with him.  There were some ladies sitting on the bench next to Mike and I and at one point they yelled over to him, “Pop…I can’t believe this is what you want to do on your 80th birthday!”  His birthday?  Well that just made the whole situation even better.  For his birthday, he wanted to trick some people with fake poop. And he got a big kick out of it…and we got a big kick out of him.  We eventually wished him a happy birthday and parted ways. 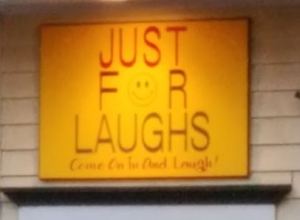 We went back to Cape May this past March and I took a picture of the store sign.  I told Mike I wanted it to be a reminder to me of that cute little old man.  He really made my day.  Pure joy in such a simple act. Sometimes I need that kind of reminder.  I haven’t been feeling so good lately and it’s really frustrating.  It’s hard when your brain is all “gung-ho” to do stuff and your body says “nope!”  I have a hard time not beating myself up about that when it happens.  And unfortunately it happens more often than I would like. This man was a reminder to me that sometimes you just need to sit back and enjoy the simple, silly things in life.  The stuff I want to get done isn’t going anywhere.  It will be there tomorrow and the next day.  Maybe if I’m not so hard on myself I will bounce back quicker and enjoy getting stuff accomplished.

Today I’m going to focus on rest.  I’m going to listen to a podcast I’m enjoying…and I’m going to remember a man’s birthday and his fake poop joke.  While I’m at it, I will let someone know I love them today.

4 thoughts on “It’s all about the poop…wait…what?!”