I just got home from a week away down in Avon, North Carolina.  My husband and I went down with friends that we’ve known for some 30 years now.  We rented a house right on the beach with the most beautiful views.  Sunrises over the ocean every morning and sunsets over the sound every evening.  We had picture perfect weather every day.  The only rain we got was in the evening once we were finished with our activities.  None of us wanted to leave our little piece of paradise, but alas we needed to get back to real life.

I tried to take a social media break while away.  I promised some friends that I would do that to decompress as a way to take care of myself.  I did pretty good.  I mainly posted pictures of my vacation and some quotes from books I was reading that I thought were really good.  However, on Monday while down at the beach I received a text that the supreme court sided with the Colorado baker.  My phone started buzzing as news was getting out about the decision.  I hopped online during lunch to try to discern what the facts were in the case.   There are many articles out there about this so if you want more info you can google it, but here is some info on what this case is referring to.

My friends and I with gay kids were somewhat dreading this decision.  It could mean major discrimination for our kids.  The outcome wasn’t as bad as it could have been, but the fact that the ruling was in the baker’s favor has already caused people to feel more inclined to discriminate.  Some of our kids (in my mom’s group) have already been denied service. 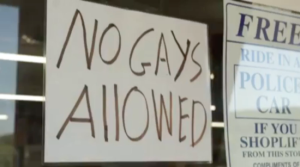 Sign in hardware store in Tennessee. It’s legal there to do this.

The baker stated that baking the cake went against his religious beliefs because same-sex marriage to him is a sin.  I’m just wondering where it would stop.  Should the baker have a checklist so that they know who they can biblically bake the cake for…things like…have you ever been divorced, have you had sex outside of marriage, do you live together? Where does the questioning stop to make it biblically acceptable? Should the baker refuse to sell to someone overweight because gluttony is a sin?  Should it be 10 pounds overweight, 50 pounds, 100?  Who decides?

We can argue over this and debate this until the cows come home.  It’s messy…I get that.  But here’s the thing…I think Jesus would have baked the cake.  Even if Jesus considered gay people his enemy (which I don’t think he does), I think he would bake the cake.  In fact, maybe he would bake two (wink).

As I mentioned, I have been posting some good quotes from a book I’m reading called “Tattoos on the Heart” by Father Gregory Boyle.  It’s excellent and I highly recommend it.  Here is one of the quotes that I posted:

“The strategy of Jesus is not centered in taking the right stand on issues, but rather in standing in the right place – with the outcast and those relegated to the margins.”

I got this response from one of my son’s good friends:
“So you know me, I’m not a religious person, but I find myself liking more and more of your posts that include religious themes, mostly because they’re about being a good person and standing up for what’s right

And this was my response:
“You know I think Jesus’ message has been hijacked by religion. He didn’t come here to start a religion. He came here to show us God’s love and how God wants us to treat others. I think humanity was getting it wrong and God sent Jesus to set it right. He was always for the marginalized, the outcast, the poor and sick. In fact, his harshest words were to the religious people of his day. So, I guess you could say I’m glad you’re not religious because that’s not what being a follower of Jesus is all about.

“Being a good person and standing up for what is right” is what draws people to Christ.  Making a stand and not baking a cake turns people away from Christ…in my opinion.  Is humanity getting it wrong again?

So you see…to me it’s not about the cake.  It’s about giving people permission to discriminate.  It’s about not showing Christ’s love.  It’s about bearing bad fruit instead of good.  People are watching and listening to how you treat others.  Are you going to attract them to Christ or push them away?

I’m gearing up for Baltimore Pride coming up this Saturday.  I think we are going to need to spread a little extra love that day. 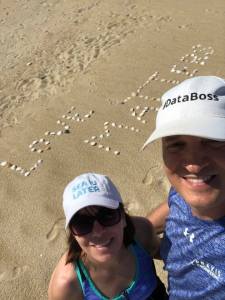 A little project my hubby and I worked on while on vacation.

2 thoughts on “It’s not about the cake…”