Where do I even begin?  How can I put so many emotions into words?  I’m not sure that I can do it.  At the very least, I can let you know why I’ve been silent for a few months.

If you’ve been a follower for some time, you know that I’ve gone to Baltimore Pride the last 3 years and have given out mom hugs.  When I did it in 2018, I knew that something bigger was brewing.  I wasn’t able to share it then and honestly it’s been such a whirlwind I’m not even sure if I mentioned it here when I could (smile).

In October 2018, I started an official Free Mom Hugs Maryland chapter.  Free Mom Hugs is a non-profit that was started in Oklahoma and it became so popular that state chapters began to form.  I got permission to start the Maryland chapter.  Boy what a ride that has been!  For our first year, we attended 10 Pride events throughout Maryland (in just a month and a half!).  We had 406 volunteers that marched in parades, gave out information at our table, and of course gave hugs.  It’s been amazing!  Our last event was on Sunday.  I’ve been one tired mama ever since!

Some of my takeaways…

I hugged way too many people who told me their mom or parents don’t accept them because they are religious.

I had several young people approach my table tentatively.  The first thing they asked was, “Is this a religious organization?”  When I said no, they hugged me…hard.  When I told them that there were moms who were Christians, but they were affirming, they hugged me again.  And thanked me over and over again.

It’s interesting how things work out.  So many of the people who approach me have lost their mom.  Some have had supportive moms and miss their only cheerleaders, and some were never able to reconcile their relationships.  Maybe they sense that I know what it’s like to have lost a mom.  Then there was the event where a mom, who just a year ago could not accept that she had a gay child because of her faith, came out to volunteer because she became affirming and wanted to help out. She had a young lady…I would say early 20’s…approach her and when she hugged her the girl just sobbed….for what seemed like forever.  She couldn’t even speak.  Her friends told us that this girl’s mom tells her every day that she is going to hell.  She got several hugs that day.  As she walked away, my co-leader and I looked at each other…we just grabbed each other and hugged and cried.  We just can’t wrap our brains around how any parent can do that to their child.  Just thinking about it brings those tears back.

We don’t just have moms at our events.  We have dads that hug too!  There was a dad that joined us this past Saturday.  It was the first time he’d ever come to a pride event and therefore the first time he ever offered hugs.  Every time he tried to thank me for allowing him to participate he got emotional and couldn’t speak.  He knew that kids were rejected, but he had no idea the scope of what that looks like.  He said he would be at lots of events next year to let these kids/adults know that they are loved.

Due to the protesters at the last two events, I can assure you that there are dozens of young people that will never step foot into a church.  It will be a miracle if they ever give God a chance.  The protesters (some of them middle school aged children) held signs that had to do with God and faith and how they needed to repent and change.  They weren’t the worst signs I’ve ever seen, but the damage was the same.   At each event, there was a man with a speaker that read Bible passages and told the crowd how God’s love was conditional and if they didn’t change they were going to hell.  At one of the events, myself and two other moms stood at the barrier that was placed between the protesters and the entrance to the event.  We tried our best to block them and give hugs to the hurting people who had to pass them to get into the event.  We stood there for hours.  There was a young man who was there the entire time yelling at the protesters to the point where he lost his voice.  We tried to get the kids to ignore them and go have fun, but you could tell they just wanted to be heard.  There was a young girl who stood in front of one of the men.  He was talking to her and she stood there for about 15 minutes and listened to him.  She was very respectful (I will admit that not everyone was).  When he was finished, she tried to speak and he shut her down.  She came to us in tears.  She told us that she always listens to what they have to say, but they never want to hear her side of things.

Standing there was one of the hardest things I’ve ever done.  I kept my back to them and faced the crowd to let them know I was there to support them.  It took every ounce of self control I could muster to not say something to those men.  I knew without a doubt that it would not have made one iota of difference.  It makes me not want to associate with anything Christian.  I struggle with that a lot because of the pain and damage I see done in the name of God.

Pride events are supposed to be safe spaces.

I think the faces of the people I hugged this year (and every year for that matter) will be imprinted on my mind and heart forever.  I am humbled that I am allowed into this sacred space.  The pain I feel radiate off of these precious humans is palpable.  My hope is for that brief moment they can feel that they are loved just as they are without conditions or strings attached. 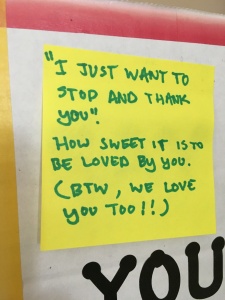 At the events, we have a board where we post notes of affirmation.  People are encouraged to take a note that speaks to them.  They are also encouraged to leave a note for someone else.   This note was left by a gay man who lost his mom recently.  She was supportive and he appreciated that we were at the event.  If you would like to get involved with a group by you, go to Facebook and do a search for Free Mom Hugs – with your state name.  Or you can go to the Free Mom Hugs website that I linked above and search for a chapter near you.

Sometimes the simplest act can have a lasting impact.

These events are a reminder to me that love matters more than ever.  Be that love to someone.