The year was 2002.  It was a beautiful beach day at the beginning of our vacation.  We were with two other

families that we vacationed with each year.  Each family had two children and they were all close in age to each other which made it convenient. We rented an awesome beach house together.  Having six kids running around at the beach was a little hard to keep track of at times.  We were constantly scanning to make sure all kids were accounted for…1, 2, 3, 4, 5, 6. Usually they were in different configurations…two looking for sand crabs by the water’s edge, two building sand castles, two sun bathing, etc. but it was always the same scan…1, 2, 3, 4, 5, 6.

At one point during that morning, my son was out in the ocean getting ready to ride in some waves with my friend’s daughter. At the time, they were in water about knee-deep.  As the waves came towards them, they would rise with it doing the doggie paddle with their little cheeks puffed up as if to help them float.  I happened

to notice, however, that at the end of one of the rises it seemed they were unable to touch.  I watched as I saw panic enter their eyes as indeed they were in water over their heads.  I alerted my husband that they were in trouble. He and one of the other dads immediately ran into the water. Unfortunately they didn’t take floating devices with them and it wasn’t long before I could tell that the guys were also in trouble.  They were caught in a riptide, my husband and son being out the furthest.

Because it was the end of August, and the college kids were back at school, our section of the beach did not have a life guard.  They were spread out since they were short-staffed and the closest one was about 3 blocks away.  My friend starting running up the beach towards the life guard frantically waving her arms to get his attention.  It was her daughter that was in the water with my son.  Luckily she did not get pulled out as far and she and the dad who went out to help her got to shore pretty quickly.  That was not the case for my husband and son.

I couldn’t believe what was happening.  Every fiber in my body wanted to run into the water to help them, but I

knew it was useIess…they were out too far. There was nothing I could do…but pray.  I swear it was like I had laser beams coming from my eyes as I focused my prayers on them.  I could not take my eyes off of them and I just got the sense to NOT STOP PRAYING.

I could tell that my son was panicking.  His instinct was to swim toward shore to known safety.  However, that is the worst thing you can do if you are caught in a riptide.  My husband knew that they had to swim parallel to the shoreline to get out.  It didn’t take them long to get tired and at one point my husband tried to get my son to float on his chest so that he could paddle them both to safety.  It just wasn’t working.  Then it happened.  My son went under and he didn’t come back up.  I saw my husband go under after him and he lifted him up and tried pushing him sideways to get out of the current.  This continued for a bit.  And as my husband went under, my son came up, and as my husband came up, my son went under. I kept praying for their heads return to the surface.

I didn’t know it at the time, but my husband shared with me that as my son came out of the water coughing and spitting he would call out, “God please help us!  God save us!”  He was 10 years old and still believed in the miracles of God. He still believed that God loved him and would save him.  And as he was calling out to God from the ocean, I was calling out to God from the shore.  It was as if time had stood still, and I could tell that they were running out of energy.

I learned later that my husband reached a point where he had nothing left in him.  He just knew he was going to drown.  He just wanted to try to save his son.  So with the last bit of strength he had left, he went under one last time and pushed our son sideways.  And it worked!  The next wave that came brought him in to shore towards me…he was out of the current.  My husband says he blacked out after that and doesn’t remember anything.  He just remembers coming to with people telling him he was in shallow water and could touch.  He has no idea how he got there. We believe it was a miracle.  The life guard got to him just as he was in knee-deep water and helped him the rest of the way out.  When he got to the shoreline, he collapsed onto the sand from sheer exhaustion.

Have you ever felt like you’re swimming against the tide?  Does it seem like you know where you are supposed to go or what you are supposed to do, but you just can’t seem to get there?  Do you question God during these times? It’s ok to question.  Maybe you are right about where God is taking you…you just need to take a different path.  Stop swimming so hard against the tide.  Look at your situation with a different view.  Maybe God needs to teach you something before you reach your destination, or maybe there is someone you are supposed to take along with you and they aren’t ready yet.  Luckily God sees the big picture.  We can lean into Him and trust this journey that He has us on.  Take some time to hear His voice.  Ride the swell of the wave and enjoy the view. 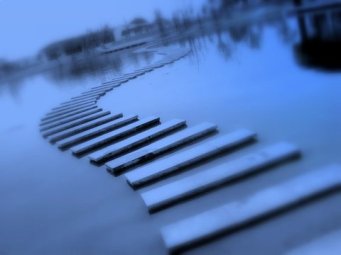 When I first learned that my son was gay, my prayer life was fighting against the tide.  I thought the final destination that God wanted was for him to change.  So, that is what I prayed for…it’s what my son prayed for too.  But we couldn’t get to the shore.  I started to listen for God’s voice and began asking Him to help me to accept this new journey.  I did the opposite of the obvious with His guidance and started swimming parallel to the shore.  And along that process I learned that it’s really all about love.