“If you don’t have something nice to say, don’t say anything at all.”  How many of us have heard that over the years from our mothers?  Not a bad motto to live by, but it seems that some people just can’t help themselves.  I’ve run into my fair share of bullies.  It seems that they didn’t learn the “golden rule” of being nice.  For the most part, I eventually learned to ignore them.  My sister on the other hand had a bully that tormented her endlessly.  She was more sensitive to it and offered the reaction that the bully was looking for time and time again.  She would come home in tears day after day because this boy scared her and bothered her on the bus ride home.   It got to the point that my dad knew something needed to be done.  So he sent me.

One day I waited at the bus stop for her to get home.  I was about fifteen which means she was 10.  This bully lived in our neighborhood so I knew that he would be getting off at the same stop.  So there I was on the busiest

street in our neighborhood….waiting (wearing my catholic school uniform no less).  My sister got off the bus and I had her stand behind me.  The young man got off as well.  He was older than my sister and had no business picking on her.  I marched up to him, grabbed him by his shirt collar (probably had to tippy toe because he was taller than me), and told him that if he ever bothered my sister again I would rip his face off.  Then I gave him a little shove as I let go of his collar.  He never bothered her again.

Now I have said this before…I do not believe in violence of any kind.  As someone who was picked on for being small, sometimes my bark had to be worse than my bite so to speak.   But I promise I was and still am a nice person (smile).  Just don’t ever tick me off (wink).  All kidding aside this bully issue is a big deal.  The official definition says that to bully someone is to frighten, hurt, or threaten someone.  I think this list should include talking badly about people in a way that makes them feel small or less than.  I think sometimes we view bullying as physical or really threatening, but it can be subtle.

I was at lunch one day with a group of moms.  Our children all went to the same Christian school for years and that is how we all met.  These moms all professed to be followers of Jesus.  At the time, I knew my son was gay, but was not “out” with it yet.  One of the moms made a comment that she was never watching the Dr. Phil show again.  When someone asked her why, she proceeded to say that he had a gay person on his show.  She felt that was wrong.  In fact, she thought God should strike all gay people dead and send them straight into hell.  I felt bullied.  I felt like my son was being bullied and he wasn’t even there!  I was really taken aback by her disdain for gay people.  What did they ever do to her to evoke such a strong reaction?  I had to hold back the tears.  This was my child she was talking about.  (I held it together though and I promise I didn’t threaten to rip her face off) (smile).  I forgave her because I knew she didn’t understand.

I’d like to say that was the last time that happened to me, but I can’t.  And as upsetting as it was to me, I cringe when I think about my son hearing something that hateful.  The psychological damage is great.  What many probably don’t realize is gay people tend to already have that negative language in their minds about themselves  because of what they’ve been taught.  Add to that the verbal attacks from others and no wonder the suicide rate is so high.

Every day people are bullied out of their jobs, denied service in stores and restaurants, and are not invited to family gatherings because they are gay.  I saw a post on FB about a lesbian being hired by the Girl Scout organization.  The person who posted it was appalled that this could happen.  I have to wonder…what do people think is going to happen?  That her lesbianism is going to rub off on the girls?  That she is going to teach them how to be a lesbian?  Do they think that this lesbian will not be able to control herself around these girls?  All misconceptions of gay people.  I bet the person who posted it never thought that they could be contributing to the possibility of ruining that person’s livelihood, but it happens a lot.

Unfortunately, in some cases church goers are the biggest bullies in this area.  Christians use the Bible to put others down.  I really think they feel that they are helping…that somehow they are “saving” those that they are pointing the finger at.  But what they don’t understand is that they come off as “holier than thou”.  It may not be their intent, but the Bible also tells us to worry about our own sin before we point out someone else’s (Matthew 7:3).  That goes for any topic of concern. You don’t know what is in someone’s heart.  You don’t know the conversations that they’ve had with God.  Your “helping” could be the very thing that makes them run as far as they can from God.  Do we really think that is what He wants?  Lord help me to always check my eye, my heart, before I check my neighbor’s.

I got coffee from Starbucks this morning and this was written on the sleeve: 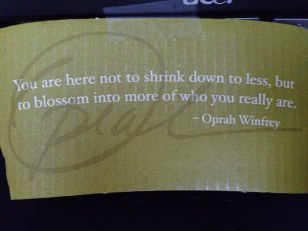 The negative things we think about someone and how that comes out is what ultimately makes them shrink down to less.  We should be building people up.  So don’t think that you have it all together and know everything when engaging with someone.  God has created everyone with a unique purpose to achieve what He created them to be.  Don’t be the one to get in the way of that.

This is really easy if you love each other…because love matters.