It was a normal school night.  I was sitting at the kitchen table doing my homework.  Both of my parents were out for the evening so I was watching my little sister.  She was downstairs in the basement watching television.  All of the sudden I heard a loud “boom” and we lost all of our electricity.  As I sat in the dark wondering what happened, I heard a panicked voice from the basement say, “Lesa, I’m blind!”  My poor sister thought she had suddenly gone blind.  Now you have to know her to understand this.  She was/is a worry wart.  She is the person you tell not to read side effects of medication because she will have all of them (smile).

I got up from the kitchen table and walked over to the basement steps.  “You’re not blind,” I said.  “We just lost electricity.”  I told her to

stay put…that I was coming for her and I carefully made my way down the steps to get her.  When we got back to the kitchen, I picked up the phone and dialed my uncle’s number who lived just around the corner from us.  To this day, my sister will say how amazed she was that I could dial the phone in the dark.  Impressionable little mind (smile).  My uncle came to check on us and let us know that someone hit a telephone poll and the transformer blew up causing everyone to lose electricity.  Crisis diverted.

I feel like I’ve been in a bit of a crisis lately.  Not a crisis of faith in God….more of a crisis of faith in humanity.  I’ve been having a hard time being at church recently.   I feel guilty that I can be there when so many of my LGBTQ friends can not go to church….or don’t feel comfortable or welcome in church.  I’m part of a private FB group of moms who have LGBTQ kids. Moms desperate for help, guidance, and answers.  I hear story after story of rejection…from their churches, their friends, their family.  There are times that I have to step away from the computer…for days…because I am overwhelmed by their pain and their children’s pain.  I’ve driven hours to meet some of them for lunch.  Total strangers…with a deep connection that can’t be explained.

It’s also hard to sit in church with people who think terrible things about my son (if you say something about a gay person, you are saying it about my son).  Most of whom have never even had a conversation with him…don’t know him at all for that matter.  Things that are said always seem to have a way of coming back to me.  I wish people would actually say these things to my face so that I could at least have a conversation about it. Sometimes I wish God would protect me from the things that people say, but that burden is so small in relation to what LGBTQ people themselves have to deal with everyday.  I asked God to break my heart for what breaks His…and He answered that prayer.  I also asked God to help me to love as He does.  I love these people tremendously.  People that I just meet…it’s like I’ve known them my whole life.  And I love them.   How lucky am I that I get to be a participant in the demonstration of God’s love?!  The love I feel is just a glimpse of the fierce love that God has for them.

So when I wonder “Why in the world am I doing this?  I am just a small fish in a really big pond,” I remember that I’m part of God’s plan.  When I worry about whether or not I’m making a difference, or if I’m doing enough, in the quite moments God reminds me that I’m not alone in this and I’m exactly where I need to be.

This past weekend was the GCN Conference.   I wanted to go SO BADLY, but it was in Portland.  A little far for me (smile). There were some Westboro Baptist protesters outside of the event.  I wouldn’t have a problem with people standing up for their beliefs if they did it in a respectful way.  The signs that they were carrying were disgusting.  I won’t even repeat what they had on them.  The most shocking thing to me was to see young children holding the signs.  When the local churches heard that WB was going to be there, they decided to come with their own signs and they formed what they called a “wall of love” protecting conference attendees from the protesters.  They were signing praise and worship songs so loudly that the protesters couldn’t be heard. Tears.  And to top it off…God provided a rainbow overhead (smile).  (Rainbows are symbols for LGBTQ)  Faith in humanity slowly being restored…Crisis diverted. 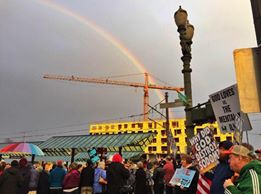