For about the last three years, I’ve been wanting to attend a Pride parade.  It just never seemed to work out.  I would either totally not remember that there even was a Pride parade until it had already passed, or I would be on vacation, or have one of those nasty summer colds.  I just couldn’t seem to get there.  Until this year.  Since I help run a PFLAG group, it was on my radar screen and I was excited to finally be able to attend. Double bonus that this year it was on my birthday!  So yesterday I spent my birthday marching in my very first Pride parade (smile).

Many people ask me…why Pride?  Why do the gays have to have a special day?  The straight people don’t have that…there isn’t a straight pride parade.  My basic answer is you don’t understand it because you don’t live it.  You aren’t gay.  Every day is straight pride day.  You can walk through the streets and be yourself.  Every day.  You can hold your loved ones hand and not think a thing of it.  Every day.  You don’t have to fear for your safety because of who you are…every day.  The LGBTQ community in most areas do not have any of those luxuries.  Pride is a time for them to be together with like-minded people and be their authentic selves.  No masks.  No hiding.  No fear.  No judgement.  Until you live without that…you probably won’t understand why they value the Pride celebrations so much.

If you’ve been a reader for some time, I’ve mentioned before that when I was younger I used to march in parades (post 1,2,3,4,5,6,7,8).  I know what it’s like to feel the energy of the crowd, and the excitement I feel when I hear the marching bands start to play. It’s fun.  So, I kind of knew what to expect.  Now I’m just going stop here for a moment to tell you how hot is was out there.  It was HOT!  Like fry an egg on the sidewalk hot.  I looked at the weather app on my phone for yesterday and at the time we were there for the parade it was 99 degrees.  That does not take into account the humidity and heat index. Yikes!  I took the biggest bottle of water I could find and let me tell you it was just about as big as me.  The down side to that was as it got towards the bottom of the bottle I seriously could have made hot tea with the water that was left…it got that heated.  Yuck!

Ok…back to the parade.  My PFLAG group lined up and waited for our turn to start down the parade route.  I could feel the excitement in the air, but more importantly I could feel the love and acceptance in the air.  As we rounded the corner, I was amazed at all the people who were there on the sides.  They had gates set up so they couldn’t go into the road and in some places the people were 4 and 5 rows deep.  Like I’ve mentioned, I’ve been in parades before, but I had never seen anything like this.  I read today that the Baltimore City Fire Department estimated that 10,000 people were in attendance.  I have to tell you…hearing the cheers as we went by, seeing the happy faces…I was overcome with emotion. I’m in tears just thinking about it now.  It’s something that I will never, ever forget.

We walked on and the cheering never stopped.  People were holding hands.  People were happy.  But it wasn’t without its protesters.  I saw four.  They were holding large signs with the usual things you see at things like this telling us to repent or the fires of hell were coming to get us.  I saw about four interesting outfits…hardly any clothing on, but other than that it was pretty tame. The rest of the people were dressed like me, or what you might see at the beach.  In fact, I’ve seen worse at the beach.  When we got to the end of the parade route, we were able to go over to the gated area to watch the rest of the parade go by.  One of the really encouraging things I saw were a group of churches go by.  There were several denominations: Presbyterian, Lutheran, Catholic, Unitarian Universalist, and others that I can’t remember because there were so many passing by.  It did my heart good to see them there.

Since I’m not gay, why go to a Pride parade?  There are a several reasons.  The first being that our PFLAG group wanted to get the word out that we are here.  We are needed…and we want the community to know that we exist in our county.  The second being that anything that is helpful to my son I want to support.  Even though he didn’t attend (it was too hot for him – and he isn’t a fan of big crowds)…it’s a place where he can be himself if he did attend.  The third is that I just want to be where people need love and support.  I feel such a strong calling to that and honestly I am the happiest when I am doing it.  The event isn’t just for LGBTQ people, but also for the people who love and support them.  I can’t wait to go again next year!

Tiny Tots Majorette – the last parade I was in…

When I’m with my PFLAG group, or with LGBTQ folks, I feel comfortable.  I’m not on guard.  I don’t have to worry about what other people think of me.  I don’t have to be prepared to “debate” someone for supporting my kid.  As parents, we don’t have it as bad as our kids do, but we do deal with being preached at, lost relationships, sometimes lost jobs, etc…just because we love and support our kids.  With all of the negativity in the world right now regarding the LGBTQ issues, it is nice to have a place to go where you see some positive.  Just this morning one of the moms in my private FB group posted this (I got her permission to share):

Hello mamas! I have been, like a lot of us lately, really struggling with all of the negative stuff on social media that just seems to be constantly circling about. I am still learning to just walk away, get off of FB, etc. because even at this stage of the journey, I tend to knee jerk react sometimes and that usually isn’t helpful at all. So today, I was looking forward to getting to church-many of you know I attend an open and affirming church here in Hickory, NC (for reals 😃)and I love it there! Safe place with lots of love! I pulled into the parking lot and dang if we didn’t have protesters today!! 😳They had huge signs and bull horns and the thing that sent me over the edge was that there were small children with them!!! 😡 WTH??? They were yelling that the all the people that died in Orlando were burning in hell right now and we were going to burn with them! They were calling for our pastor to come out and face them- they called him a liar and a coward. It was awful! They said that they were standing far away from us so that our perversion wouldn’t touch them. It was just unbelievably awful! So much for peace 😰

These are the types of things that we and our kids deal with on a daily basis.  It’s hard sometimes to not just crawl in a hole some where and never come out.  It gets to be exhausting. 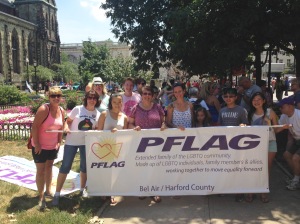 This is my extended family. Love them!

I told my son yesterday I wished there was a Pride parade every weekend (smile).  But while I wait for 2017 Pride, I will be searching for ways to show this community that I love them, that God loves them, and that they matter more than they can imagine.